Peguis First Nation (Mar. 30, 2017) Peguis First Nation council is in a state of financial crisis following months of out-of-control spending and financial mismanagement by the former chief and a small team of administrators who made decisions without involving the rest of the council. Councillor Annette Spence-Meeches said the council doesn’t have sufficient funds to buy flood supplies to protect homes at a time when the spring melt and run-off has put streams and the Fisher River at peak levels.

Payroll which runs at $5 million per month will be difficult to cover based on existing arrangements with funding and bank authorities. Consequently, payroll for March 31, 2017 will be done manually which means cheques will be able to be picked up on March 30 and can be cashed on Friday March 31 at any financial institution.

Chief Glenn Hudson said the council today received confirmation that Indigenous and Northern Affairs Canada (INAC) has put the community into default status as of Feb. 27, 2017. A copy of the letter is now posted on the Peguis web site. Peguis is listed as being in Third Party on the INAC web site.

“This confirms what I have been saying the past few weeks, that we are in dire financial straits.”

So far, the council has uncovered the following information about Peguis finances:

• The First Nation owes in excess of $1 million in unpaid benefits to teachers and band staff.
• Another $1 million may be outstanding in unpaid contracts for services and supplies to third parties, many of these from Peguis.
• There are numerous financial irregularities. But this is only on the first week of the council investigating community finances.

Peguis council is looking into all avenues to determine best options to avert financial disaster. “We are now into discussions with INAC and lending authorities. We will report to the community in two weeks with an update,” said Chief Hudson. 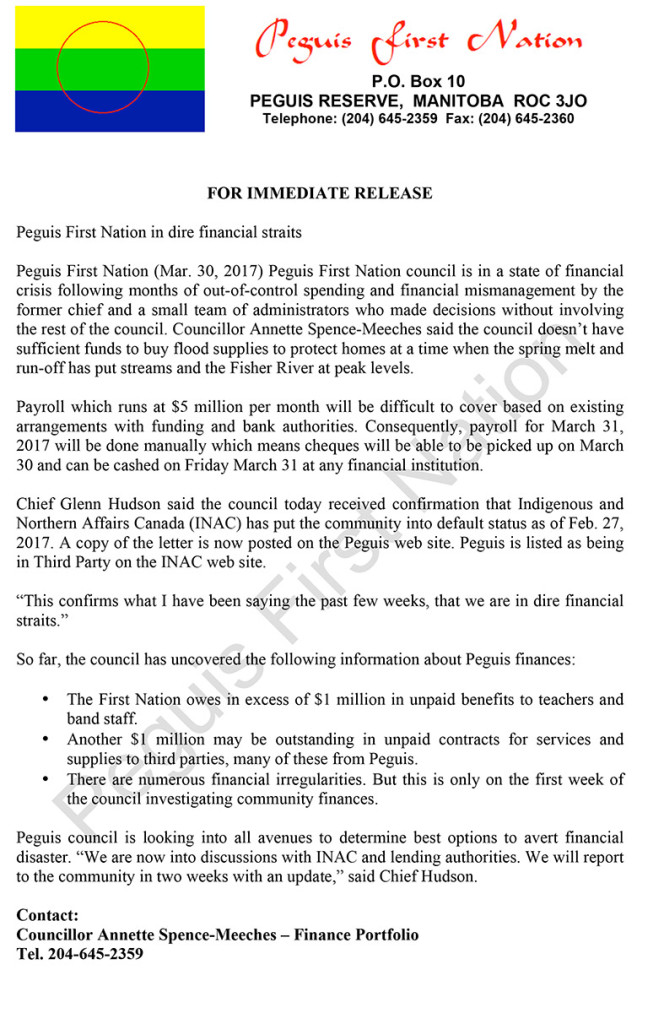